Nanako writes and creates as the American-born daughter of Japanese immigrants. She writes to understand herself, to explore creative expression, and share her cross-cultural experiences with the next generation — which includes her three children.

Nana’s parents survived WWII in Japan and immigrated to America shortly after the Occupation. Although she was born and grew up in Boulder, Colorado, Nana’s childhood experiences in Japan, as well as Romania and the Netherlands greatly influenced her. After graduating from the University of Colorado, she obtained a Master’s Degree from the School of International Affairs at Columbia University, New York City.

Nana has a diverse background. In addition to working for the National Park Service, a Japanese steel company, and writing as the Japan Correspondent for an American newspaper, Nana worked with international students at the University of Colorado, Stanford University and the Fulbright Commissions in Tokyo, Japan and Jakarta, Indonesia. She also taught and wrote about jewelry making, origami and Japanese culture.

After translating and publishing Tei, A Memoir of the End of War and Beginning of Peace, Nana continues to focus on writing and art. She currently lives in Seattle, Washington. 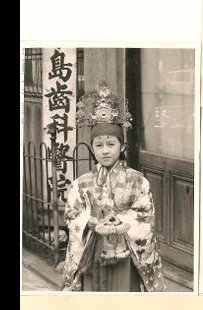 Dressed up for ShichiGoSan Festival.