Reviews including those from: Goodreads.com, Shelf Media Group , Japan Times and Amazon.com

Below are a selection of reviews: 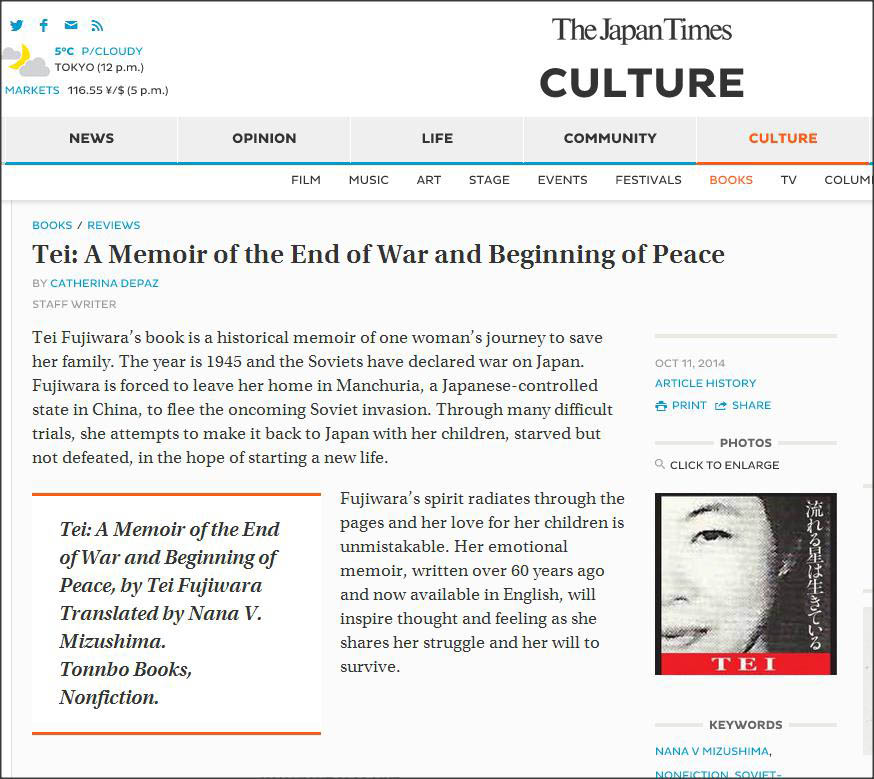 “Fujiwara here recounts a terrifying journey home from Manchuria with three young children in the final chaotic days of World War II. The family was in Manchuria as part of the Japanese colonial occupation there. The trip took several months during which they suffered cold and snow, often on foot and shoeless, shortages of food, clothing and housing, various illnesses, and encounters with unsympathetic bureaucrats before they made it home. Her oldest child was five and the youngest an infant she had to carry on her back. When milk ran out she feared fro the life of her listless infant. One of the worst privations they faced was the lack of water, when their mouths were so dry they could barely speak. A concern that was subsumed under the start struggle for survival was the fact that her five-year-old was missing school.

The odyssey called on all the courage and determination Tei could summon to avoid advancing Soviet forces. Fearing that she would not survive the ordeal, on her return she wrote her memoir as a testament for her children. Her story has resonances with our daily media accounts of the displacement, wounding, killing, and rape of women and children in violence around the world. She was more fortunate than many, arriving home with herself and her three children basically intact and able to reunite with husband and father.

Nana Mizushima has chosen the daunting challenge of translating this book from Japanese, the world’s most complex writing system, with grammar to match. She had the advantage of being raised by Japanese-speaking parents, not to diminish the literary and cultural sensitivity with which she accomplished this feat, with the aid of her mother. Readers might wish that place names in Korea and Manchuria were not rendered in Japanese, though a glossary is provided. Mizushima is to be commended for providing Western readers with this chilling account of some wrenching human aspects of the end of World War II.

The book became an almost instant best-seller in Japan, running to forty-six printings and appearing in movie and television versions.”

We hope you will also add your comments to these sites after you read the book.

“Tei reminds us of what the Syrian and other refugees must be experiencing today in similar circumstances. It is a story without boundaries for all time.”

“The story of Tei Fujiwara is amazing. I found myself in equal parts, amazed, humbled, and terrified if I could ever live that standard of relentlessness and courage.”

“…that is part of what makes the memoir so compelling – to try to understand a little more of other cultures and how it creates a basis for a behavior today. The story is one that shares, at the granular level, the misery of war suffered by the people of Japan. This book is a “must read”.

“By the end of the story, many months later, the reader will have formed very specific opinions of the people involved, their actions, and choices made. You may find yourself uttering judgmental critiques about the people and events in this story. Many of the characters did not make it “home”. You cannot remain neutral in this story.”

“This is a story I will remember! As a mother and a woman, the struggles and challenges Tei Fujiwara faced seem unimaginable. . . Her strength and will to survive and to keep moving forward and to care for her children was remarkable. This is an important historical memoir, translated in a very readable and engaging style.”

Tei’s story moved me profoundly. Tei brings us with her through condition of appalling hardship with two small children to look after as best she could, often in depths of despair. she inspires us, and she humbles us. For Tei never loses the most precious aspect of being human: her ability to see those around her as human beings, also. Their actions are helpful and generous, or threatening and cruel, but they are human. In a  time when people were often seen as merely one of a group defined as ally or enemy, as they were during WWII, and as they too often are today, Tei’s vision is especially important. I am grateful to her for her courage in remembering and writing her story.

What do you think of Tei’s story?

4 Replies to “Reviews of Tei”