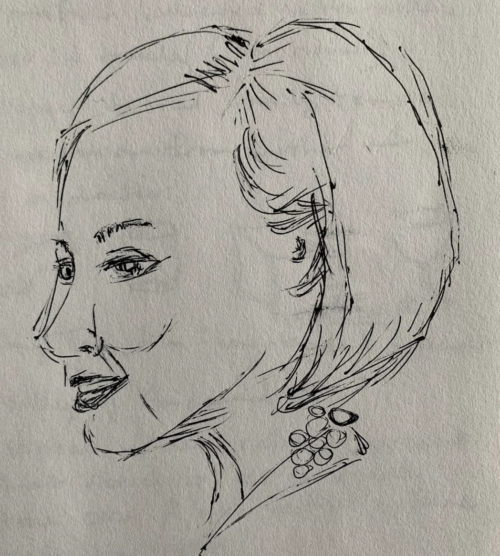 Amy Tan described her mother muse as “lihai”. Even before I knew it meant “terrible, formidable and devastating” – I was aware my own complicated maternal relationship. In the case of my mother, she was ten years old in Tokyo when WWII began. In hindsight, I believe my mother suffered from PTSD shaped by the trauma, violence and death she encountered during her formative years. Like Tan, I also remember the moment I decided to no longer fight or resist my mother. It was in 2000 when i moved back to Boulder to live near my childhood home. And when my mother realized I was listening, she began to share her wartime trauma with me. But I was in my fifties when I was finally mature enough to listen without judgement or fear.

Amy Tan’s drawing of birds is an example of how writing requires heightened sensitivity. In order to write well, I need to pay attention to the world. Not only what my mother was saying, but also what is she did NOT say. Just as Tan notices the fine lines of a feather that would normally be invisible, I must learn to listen to the whispers of the dead. So I began playing the cello again after a 50 year break. Listening to and playing fine music, note by note helps attune my writing.

Tan’s example of how she used the clues from her grandmother’s photograph to write the novel Valley of Amazement was a wonderful insight into the mind of a writer. She used those details to grow story. I also used a 1934 high school graduation photo of my long lost relative Grace to piece together the day that year when she lost both parents and her future as a mother in a terrible car accident.

In writing Grace’s story, I also tried to follow Tan’s goal of finding the emotional truth behind the factual truth. Using fragments from my father’s letters (Grace’s cousin) who immigrated to the US in 1952, a conversation with Grace’s brother who was trapped in Japan during the war, and online research – I tried to recreate her emotions while she was incarcerated in Manzanar.

Tan’s comments about her husband Lou made me aware of the sacrifices a writer must make. While women praise Lou for being such a thoughtful, supportive husband I wonder if they realize how many sacrifices Tan made to deserve such a partner? Her decision to not have children allowed her to devote her energies to writing. She is willing to work long hours alone to create great stories. I am too selfish to have a “Lou”. I wanted it all. Three children to raise myself at home, interesting work with other people, travel, and now writing only about things I am interested in. So it’s no wonder I’m so unsuccessful in my writing career and single.

Amy Tan made a huge impression on me when her Joy Luck Club novel first appeared in 1989. She inspired me to consider my Japanese American family story worthy of telling.